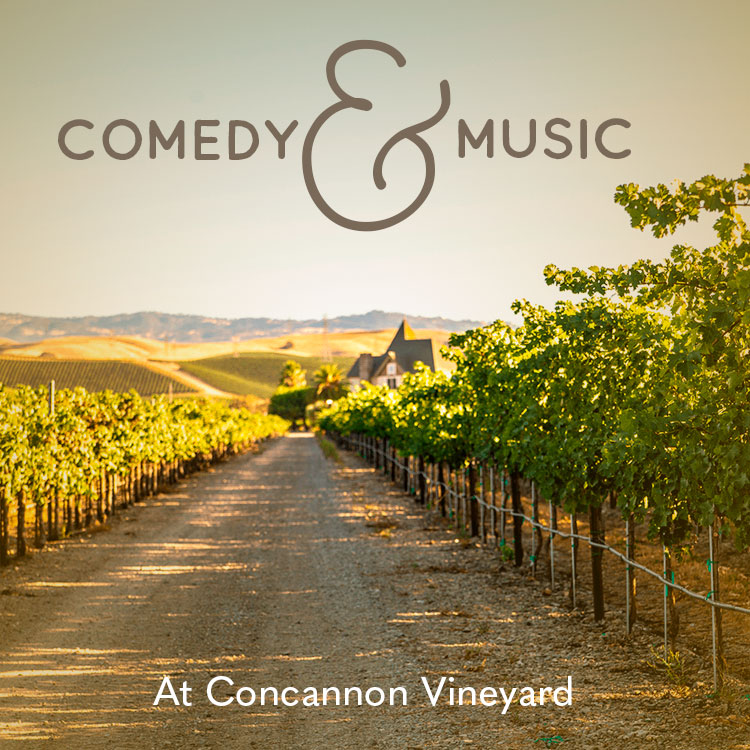 Showmentum and Concannon Vineyard present an evening of standup comedy and live music at the estate grounds.

Catch One of the Fastest Rising Stars in Comedy

Start your evening off in the Tasting Room with laughs from standup comedian Gina Stahl-Haven. Gina took 2nd place in this year’s San Francisco Comedy Competition, making her the first female finalist since Ellen DeGeneres in 1985. This amazing contest has launched other comedy greats like Robin Williams, Dana Carvey, Marc Maron, and Patton Oswald. This is a unique opportunity to catch Gina, in one of her first public performances since finishing the competition.

The Jeff Bordes Trio featuring Rudy Parris will be playing in the Estate Room after the comedy show. They’ll be playing acoustic Jazz & Blues. Jeff has played live and recorded with some of the biggest names in music including; Tom Petty, Stevie Nicks, and Branford Marsalis. Rounding out Jeff’s trio for the night will be guitarist and finalist from “The Voice”, Rudy Parris.

You can find out more about each performer below.

Limited seating available. Bottles and glasses of wine as well as deli items will be available for purchase during event. All attendees must be a minimum of 21 years old.

Gina Stahl-Haven has been performing in the comedy and improv world for over 15 years; featured at the Un-Scripted Theatre Company, SF Improv Festival, Hawaii Improv Festival and various comedy spots throughout the Bay Area. She is the 2nd Place Winner of the San Francisco International Comedy Competition in 2019 (the first woman to place this high in 34 years) and winner of the 2nd Annual MarinComedy Amateur Competition. Gina’s real take on life, motherhood, dating, and navigating Costco, combined with her intoxicating stage presence, make her irresistible on stage.Follow Gina on Facebook and Instagram @MamaBeCray

Jeff Bordes needs no introduction to those in the music industry. A 1997 graduate of Berklee College of Music in Boston, he has been playing since his early years and since, hasn’t stopped changing the face of jazz. He has during his career played live with and recorded on the projects of such esteemed artists as Jon Faddis, Branford Marsalis, Alex Acuna, Giovanni Hidalgo, Horacio “El Negro” Hernandez, Richie Cole, David Garibaldi, Tom Petty, Steve Earle, Stevie Nicks, Sheryl Crow, Karl Denson, Sugarhill Gang, Dana Carvey and most recently, John Mellencamp. He has toured in Japan and across the United States with various groups such as the Bill Berry Big Band, Dizzy Gillespie, and others. Bordes has recorded numerous CDs for a variety of groups including San Francisco’s Force Seven, Adam Ben, Heather Combs, and Boston’s ‘The Hi-Hats.’

Native American country singer/songwriter hails from Central California’s San Joaquin Valley.  Being influenced by the Bakersfield sound, Parris was honored to have enjoyed a longstanding residency playing alongside country legend Buck Owens at his Crystal Palace in Bakersfield, CA.

He is probably most well known for his appearances on Season 3 of NBC’s The Voice, where he was featured to over 190 million viewers.  He was a member of Team Blake (Shelton) and was featured in that season’s live finale with a guitar and vocal performance on “Rock and Roll All Night,” a favorite by his rock heroes, KISS. 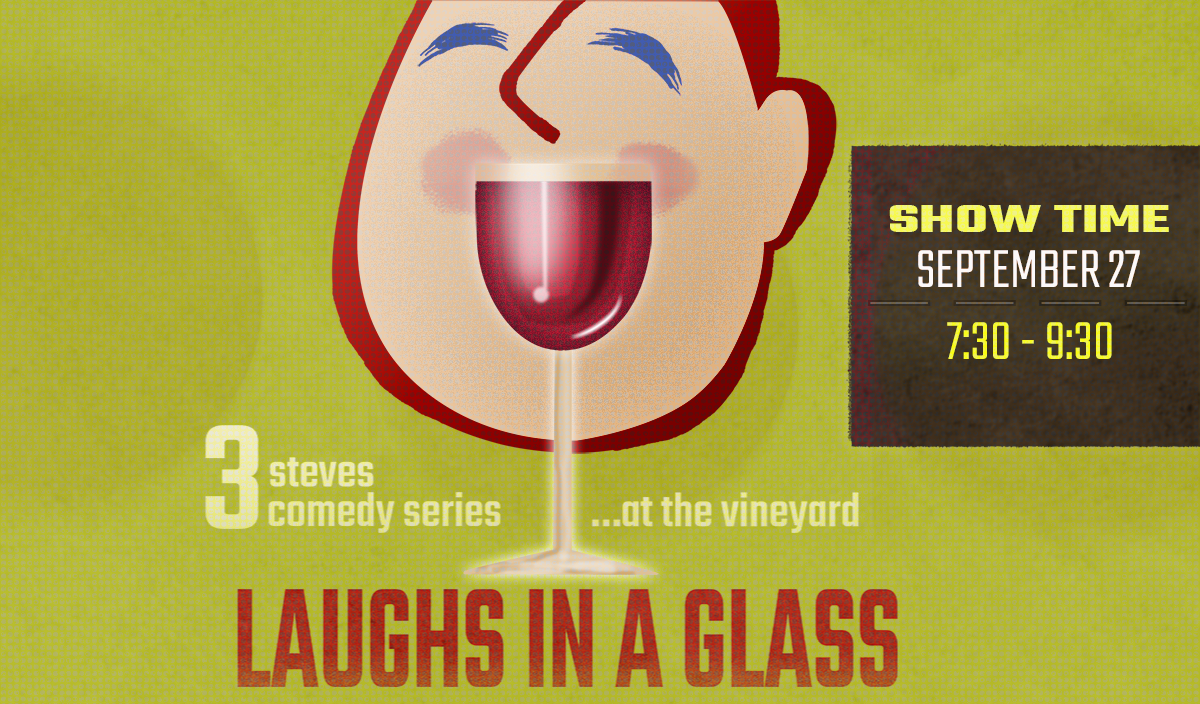 This show has been postponed until a future date. When we know the new date will post that information here. If you would like to be notified by email of the new show date, please fill out the form below.

We’ll have a food truck and wine by the glass or bottle for sale. A limited number of reservable tables are available. To check availability and reserve a table call 3 Steves Winery at 925-364-4889.

James Mwaura is a standup comic based in SF. Born to a German mom and Kenyan father and raised in the South, James likes to makes fun of white people but also enjoys a PampleMousse La Croix from time to time. James was recently named by 7×7 Magazine as one of the comics to watch in San Francisco, and he does shows all around California. Check out his podcast Color(ed) Commentary on iTunes!

Brian is the creator, and host of Adulted, and a Bay Area comedian and writer. He left the high stress world of tech for the low wage life of standup comedy performing under the stage name Skip Everett. His biggest claim to fame is inventing the Spam filter so he’d have an excuse for not reading his parents’ emails.

Oakland California comedian Jason Cole hit the comedy ground running by taking 1st place in the first competition he ever entered, winning a feature spot opening for comedian and TV star John DiResta at the Orinda Theater. Jason recently performed at the Chicago Nerd Comedy Festival as well as at many of the legendary San Francisco Bay Area clubs such as the Punch Line and Cobb’s. His quick-witted, self-deprecating style finds humor and laughs in all the dark corners of his life and the crazy life around us.

You’re Supporting a Great Cause!

Culinary Angels is an all-volunteer, donation-based group that provides healing, nutrient-rich meals to people going through a serious health challenge.  About 95% of their recipients are actively going through cancer treatment.

Their volunteers are trained to cook with as many organic ingredients as possible and focus on nutrient-rich, plant-based, seasonal ingredients. Emphasis is placed on using cruciferous vegetables, sea vegetables and homemade broths in our soups. Culinary Angels believes this philosophy will help promote health, wellness, and hope to people who are compromised by their challenge. Organic, healing foods are an important part of our bodies’ natural instinct to be well! 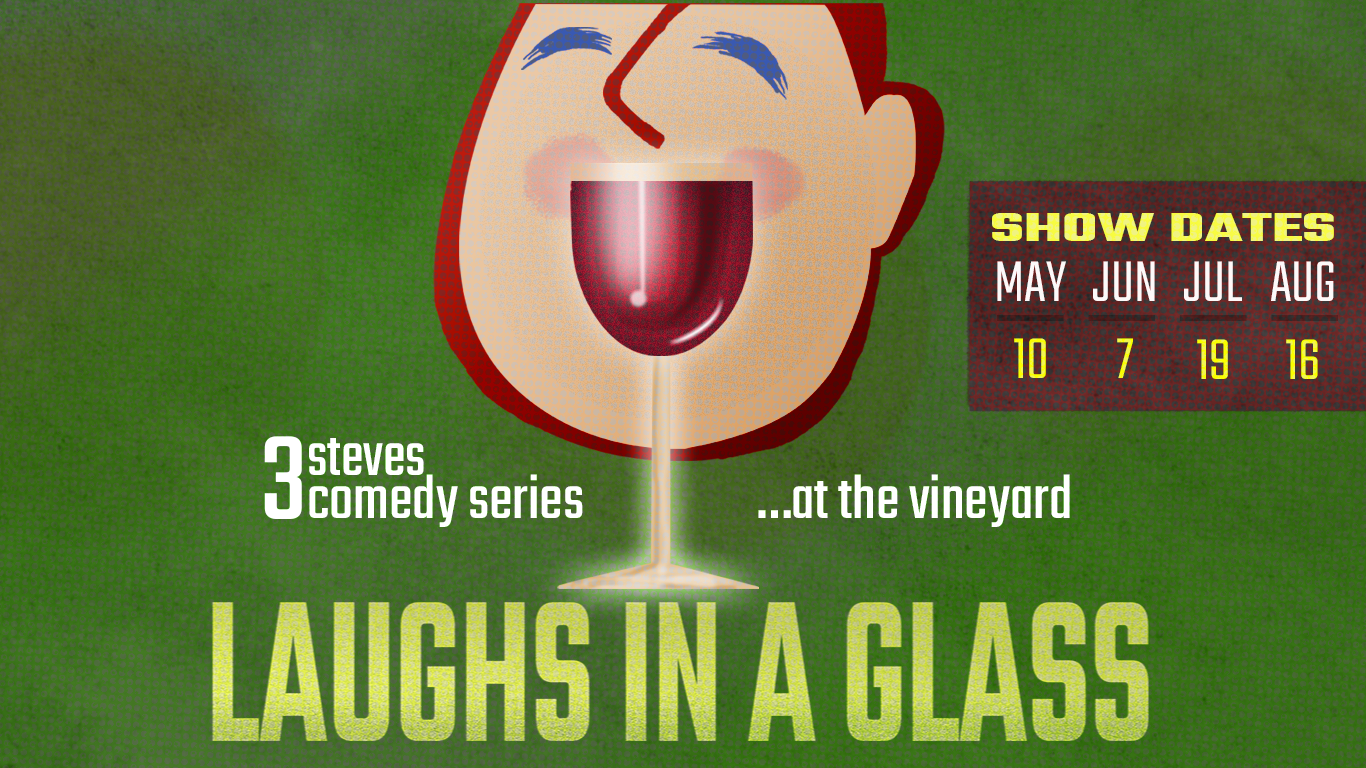 Showmentum presents an evening of standup comedy under the stars and in the vineyard at 3 Steves Winery. Laughs in a Glass features the best of Bay Area comedy for a great cause.

Alyssa Westerlund’s sweet, innocent looks belie her wicked sense of humor and spot on delivery. She inspires women and melts men, like toy soldiers in the microwave. Alyssa’s comedy will rip your guts out, tear your heart to pieces, grab you by the genitalia and not let go until you’re in stitches.

Paul has performed in clubs all over the country and was selected to participate in SF Sketchfest 2019. He recently took 1st place in the 2019 World Series of Comedy Sacramento satellite and will advance to the Main Event in September for the third consecutive year. Paul is absurdly tall and may become confrontational if you claim to know more about Harry Potter than he does.

Samson Koletkar was born in Mumbai and raised Jewish. Growing up in the world’s most crowded city, he spent most of his childhood years burning the midnight candles for earning a Masters Degree in Computer Software, thereby fulfilling his parent’s dreams. He then moved half-way across the world, to the technology headquarters and a hotbed for emerging comics – San Francisco.

Brian is the creator, and host of Adulted, and a Bay Area comedian and writer. He left the high stress world of tech for the low wage life of standup comedy performing under the stage name Skip Everett. His biggest claim to fame is inventing the Spam filter so he’d have an excuse for not reading his parents’ emails.

You’ll Be Supporting a Great Cause

Culinary Angels is an all-volunteer, donation-based group that provides healing, nutrient-rich meals to people going through a serious health challenge.  About 95% of their recipients are actively going through cancer treatment.

Their volunteers are trained to cook with as many organic ingredients as possible and focus on nutrient-rich, plant-based, seasonal ingredients. Emphasis is placed on using cruciferous vegetables, sea vegetables and homemade broths in our soups. Culinary Angels believes this philosophy will help promote health, wellness, and hope to people who are compromised by their challenge. Organic, healing foods are an important part of our bodies’ natural instinct to be well!

Any Questions About the Show?

What time do the doors / gates open?

You can come as early as 5:30 for the show. There will be wine by the glass and bottle for sale before and during the show. Also, we will have food available for sale from one of the many great food trucks or catering services around Livermore.

Is the show outdoors?

Yes, and even though Livermore can be extremely hot during the day, it cools off a lot at night once the sun goes down. Sometimes it can be a little windy. We recommend bringing a jacket or fleece for the evening.

Is food available for sale?

Yes, there will be a food truck on site starting at 5:30pm when the gates open.

There’s plenty of free parking in the lot and in back.

Look ahead before heading out. Sometimes traffic on Tesla road gets backed up from people avoiding 580. Taking Patterson Pass to Greenville road can get you around the frustrating bottleneck.

Can you buy tickets at the door?

If tickets are still available the night of the show, we will be selling them on site. You can always call 3 Steves at (925) 364-4889 or contact us via the Showmentum Facebook page http://facebook.com/showmentum.

Start celebrating the weekend early this summer. Showmentum and Crooked Vine Winery present Over the Hump, Thursday evenings of music, comedy, and fun in the courtyard.

This Thursday we’ll be having our first Open Mic for comedians and musicians from 7:00 – 8:30pm. If you would like to perform 4 minutes of standup comedy or a single acoustic song, we have 10 open slots available. Sign up is first come, first serve using the form below. 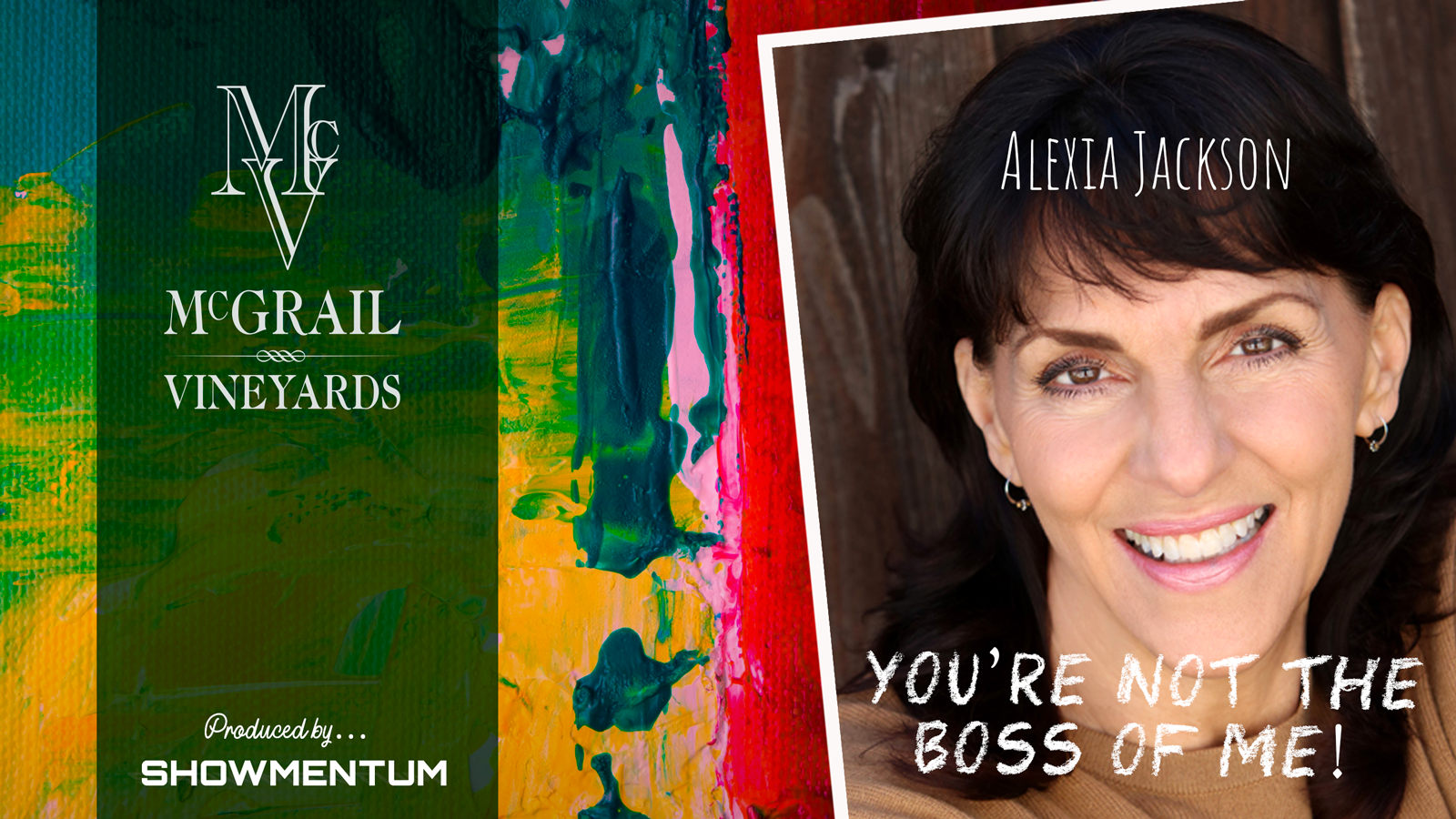 This Mother’s Day weekend, why not get mom something she can really use – like some laughs, wine, and a night out with friends!

ALEXIA JACKSON believes “It’s time for mothers to COME OUT!..what the hell – everyone else has!..” and tell the truth about the impossible and humbling journey of raising kids, by forewarning the next generation – and validating the current one.

With the last of her three kids off to college, she has returned to stand-up, having previously performed at San Francisco’s Cobb’s Comedy Club and The Punchline, and all over the Greater Bay Area including Trek Winery, Crooked Vine, Backstage Wine Café and Sweetwater Music Hall, to name a few.

Audiences love supporting her hilarious comedy as she makes her way to Los Angeles to fulfill her dream of performing on The Ellen DeGeneres Show, in a “Go Big or Go Home” effort to prove… there’s life after parenting! 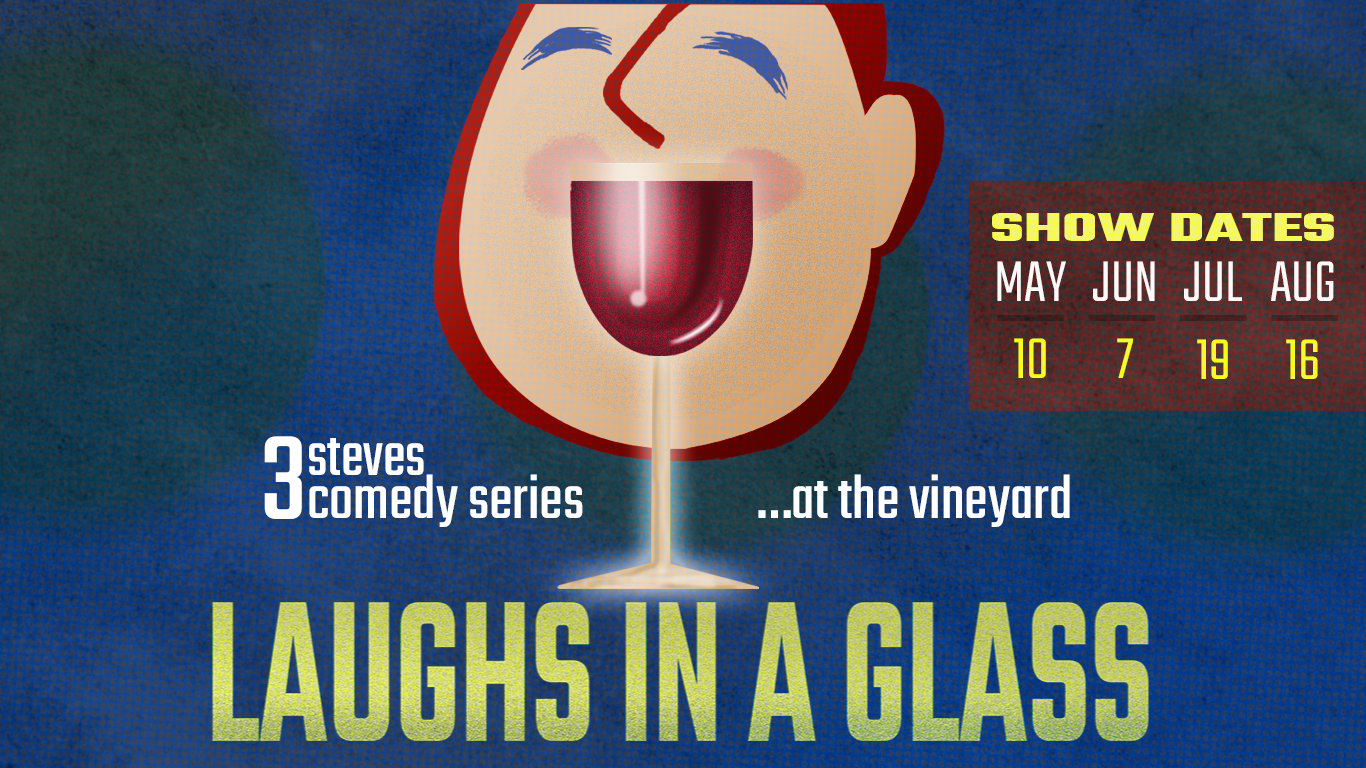 Showmentum is excited to announce a new partnership with 3 Steves Winery. The forecast is sunny & funny with a 100% chance of laughs this summer in the Livermore Valley. There will be four shows with new acts every months. Tickets are currently on sale for the May 10 show at 7:00 pm. You can find them here.